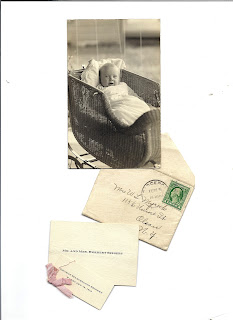 Pictured above is little George Seibert when he was about three months old. Below that is one of his birth announcements and the envelope it came in addressed to a family member. George Marcellous Seibert was born 12 February 1916 to Herbert Seibert and his wife Mary Rowlee. Mary was the daughter of George Rowlee and Mary Carr. The family lived in various places including Ellicottville, NY, Washington, PA, Bridgeport, IL and Ft. Worth, TX.

Notice the pink ribbon? Believe it or not, pink was the color for boys back in the day! Yep, start here for information on when girls started wearing pink in an article by Smithsonian. There's also a nice photo gallery at this website. Wikipedia's article on the color pink mentions that pink was "first established as a female gender identifier in the 1940s" and points to a publication from June 1918 stating "The generally accepted rule is pink for the boys and blue for the girls." Both articles make reference to author Jo B. Paoletti who wrote a book entitled  Pink and Blue: Telling the Boys from the Girls in America.

Tragically, little George Seibert died of a snake bite at about the age of 5 and why I did this post for him as a "Wednesday's Child."