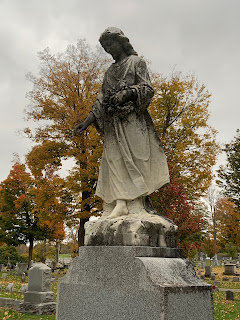 On a lovely but overcast fall day last mid-October, I drove to Springville in Erie County, New York to visit Maplewood Cemetery and its adjacent counter-part St. Aloysius Cemetery. For the Westfall family line, there are four generations buried in these grounds if you include the Pfeffer family in St. Aloysius. Lawrence and Marie Pfeffer were the parents of Margaret (called Maggie) who married Herman Westfall. See this post here for more about Maggie and Herman's family. The Pfeffer family stones are not often visited as few know or recall the connection. I myself have visited probably only once or twice before and it took me a bit of time to locate the stones again this time. I began thinking of future generations and decided to take photographs in anticipation of creating this blog post. My intent is to have it serve as a guide for others who may wish to visit at a later time. 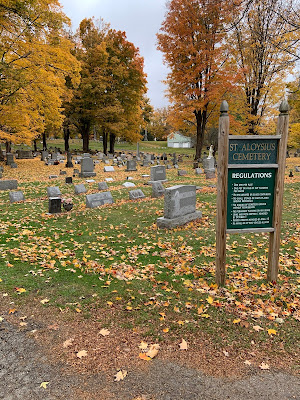 If you come off Waverly Street in Springville to Ohio Street, you will come to the entrance of St. Aloysius. Alternatively, if you enter Maplewood Cemetery first from Route 39, you head down and towards the left and drive in the back way. Making your way to this entrance sign in the photo to the right will orient you.

See that statue topping a stone showing just to the left of the sign? That's a useful guide stone to get where you want to go next. This statue of Christ marks the top of the gravestone of Michael and Elizabeth Weber in Section 06 of the cemetery. They were the parents of Susannah Weber whose stone is just to the left of theirs. They were also the parents of Johanna Weber who married Frank Pfeffer, brother to Maggie Pfeffer Westfall. Frank and Johanna's stone can be seen in the same row to the left of Susannah's. 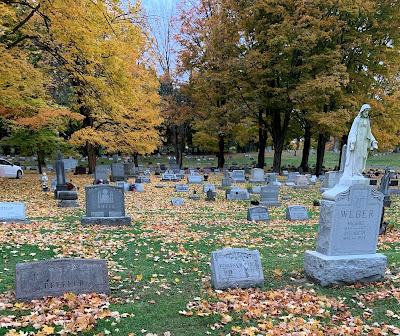 In the next row behind the statue (to the left in the above photograph), you see two smaller stones similar in size which mark the resting place of Frank and Maggie's parents, Lawrence and Marie Pfeffer. You can find more information regarding Lawrence and Marie here on the FindAGrave website. 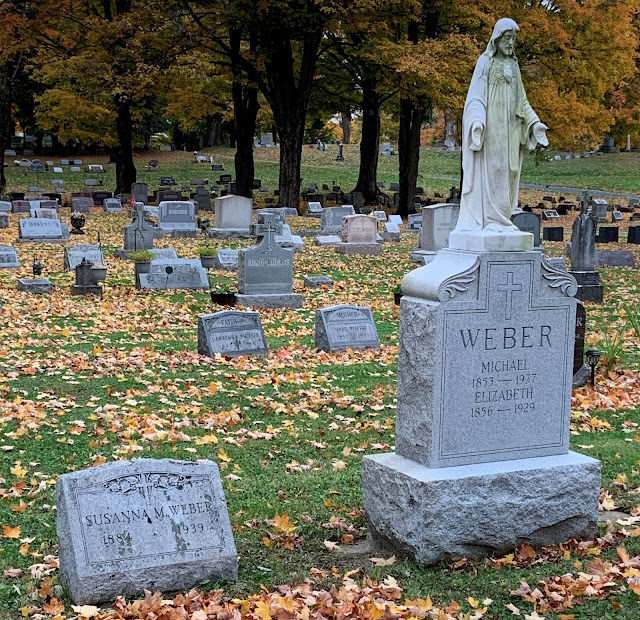 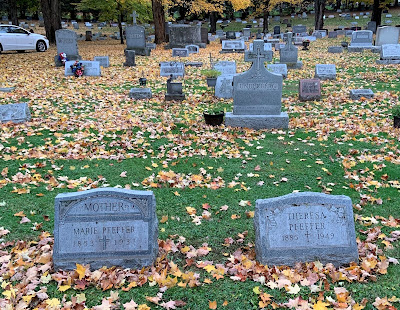 To the right of Marie's is a stone of similar size for their daughter Theresa Pfeffer (Theresa can be seen in a photo taken around 1920 shown in this blog post).

One other child is buried here but no stone marks the place. Records of St. Aloysius Roman Catholic Church in Springville indicate that Caroline Pfeffer was born to Lawrence and Marie (nee Kilger) on 26 March 1886 and baptized on March 28th. Peter Weismantel was listed as Godparent. The records also note that Caroline died of consumption on 27 December 1886 and was buried the next day. 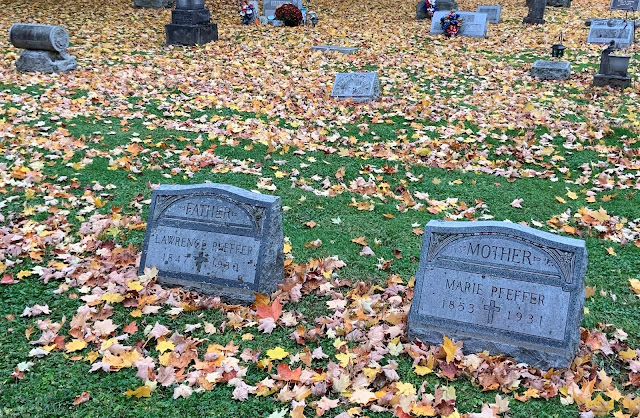