Last night I finished reading A Star for Mrs. Blake by April Smith. The novel is set in the 1930s and is a story about five Gold Star Mothers who travel to France to visit the graves of their WWI soldier sons. When I downloaded it to read on my Kindle, I vaguely recalled that Granny Westfall's mother, Anna Coughell Smith, was a Gold Star Mother.

After I finished the book, I jumped online and googled Gold Star Mothers to learn more about the history. Interestingly enough, the last Sunday in September was designated as "Gold Star Mother's Day" by a proclamation approved by Congress in June of 1936. 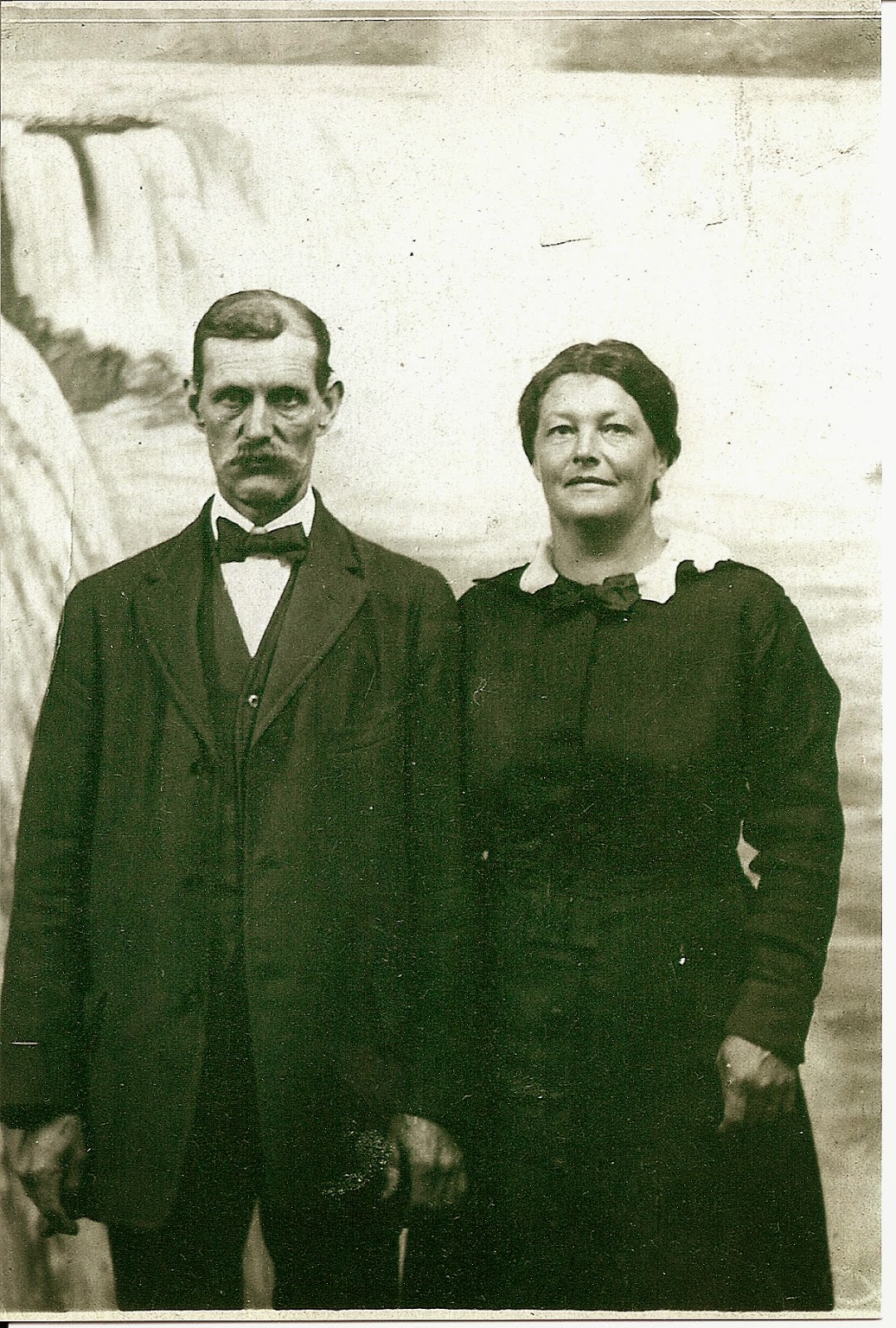 Shown here in a postcard pose with Niagara Falls in the background is Anna Coughell and her husband Eliud Smith. According to an inscription on the back of the original photo, this was taken in 1916 on a trip back to their native Niagara Falls, Canada for the funeral of Egerton Detler, Eliud's brother-in-law. Eliud and his family immigrated to the U.S. on 7 February 1911. In an interview I had with her a few years before her death, Eliud's daughter Mabel (Granny Westfall) recalled walking over the bridge when they moved. She was just under five years old.

In that interview, she also told me that her Smith grandparents "had a little house with a cemetery where my mother buried her first child." This child was George Wellington Smith born 18 September 1893 in Stamford, Welland County, Ontario, Canada and died 18 February 1894.

Eliud and Anna's next child was also a son, Edward Eliud Smith, who was born in Stamford on 18 December 1895. This picture postcard of him indicates that he died 9 August 1918 in France. Another family researcher had information that he was buried at Le Quesnel Communal Cemetery Extension in France. 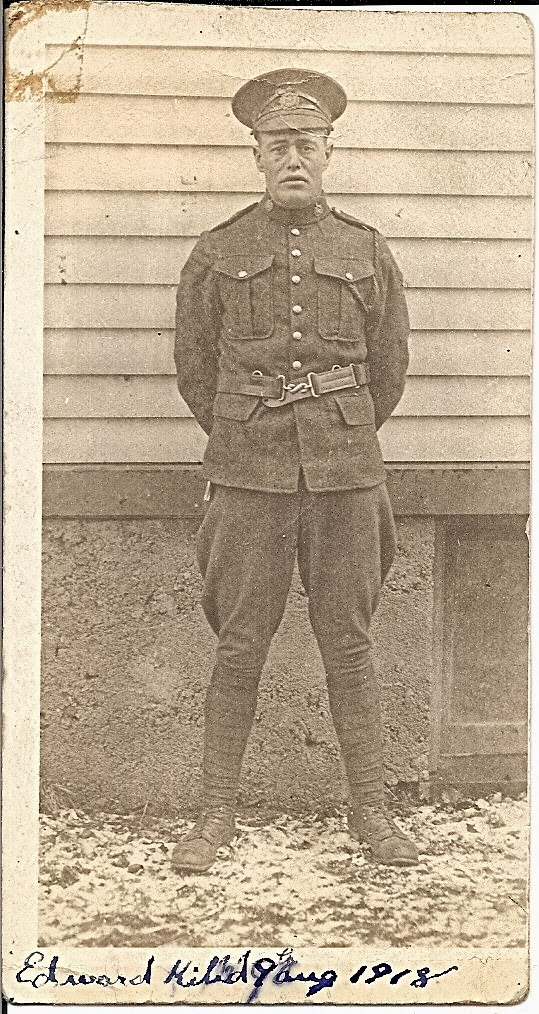 So today, I honor the memory of those who served and died in service to their country and the loved ones left behind to mourn their loss.
Posted by Dawn at 7:23 AM No comments:

If she were still alive, my maternal grandmother would have been 101 years old a couple of days ago on September 22. She was the fourth of six children born to a native of Friesland, Netherlands and an American-born daughter of emigrants of the Netherlands as well. She married a man also born of Dutch natives in Hudsonville, Michigan on May 15, 1933.

When I was eight years old, my father retired from the Navy and we moved to be near these grandparents. We lived with them for several months before settling on a lot adjacent to the home that my grandfather had built as their retirement cottage right around the time I was born. My grandfather also constructed another building in front of his garage/workshop where my grandmother sold her craft items. She called her shop, Ted’s Treasures, because her nickname was Ted. She sewed, she painted, she knitted, she crocheted, she embroidered. I am not sure there was anything she did not do. I remember her crafting with plastic canvas when that became popular, too. Her children and grandchildren were recipients of many clothes she handcrafted. Several of the dresses I wore for school pictures during my early grade school years were ones she made. She sewed a new outfit for me and my brother every Easter. My absolute favorite dress was the long red calico one with matching bonnet that she made for me when I was in fourth grade (I fancied myself as a young Laura Ingalls).

Of her many crafts, it was the Barbie doll dresses that captured my attention as a young girl the most. I remember one time in particular, I was home sick in bed with a raging sore throat and she brought over a dress she had made for my Barbie to cheer me up. I was older by this time and it was probably one of the last times that I both played with Barbies and was so sick that I received royal treatment (I recall that I was even allowed to stay in my parents’ bedroom that day). But times change as they always do and I grew out of playing with Barbies. With my mother’s penchant for giving things away to other neighborhood children, that Barbie dress is the only one that remains with me today. I don’t recall the details, but perhaps I consented to give away the other Barbie stuff (I had loads of it) because somehow that dress ended up on the first Barbie doll that I ever received and has been packed and carried along with every adult move I have made to this point. As a matter of fact, I know that doll is here in this house somewhere, but I can’t recall just where exactly.

My grandma was always well-dressed with coordinating costume jewelry and always had lipstick on. She carried her purse with her everywhere. Just recently I was at my sister’s and we were looking through some of grandma’s old pictures and found several of grandma with her trusty purse on her arm. Even in my sister’s wedding picture, she has a purse on her arm like she got caught just before she was making her exit. Another picture shows her in a more casual pose but still with her purse on her arm. We laughed over that. And I can hear her in my mind giggling with us and saying, “Oh, guy!” in a way that was pure grandma. There’s so much else I could say about my grandma. She was the sweetest woman who would never say a bad word about anyone and I admired her greatly.
Posted by Dawn at 9:26 PM No comments: