Oh dear, for those of you following this story fresh, this post never got scheduled for publication until now. I truly left you with a cliff-hanger. My apologies!

When I first began researching family history years ago, I had an elderly cousin tell me that it might not be a good idea as I might find horse thieves or worse. I think I recently found one.

I spent some time trying to compile what I recently discovered in online records on the Backus family of Wyoming County, New York. I mentioned my brief version of the research cycle in the previous Wednesday's post: gather, compile, analyze, do it all over again. In compiling, I go back through the records I have gleaned and make sure I have documentation for what I think I know during the gathering phase. It also highlights for me what is missing and what I might still have to go looking for, an important step.

The findagrave.com entry for Etna Smith Backus gives a transcript of her obituary which contains an important clue in establishing the ancestry of Rollie, namely that she was the mother of Charles Backus. I went to fultonhistory.com to look for a digital copy of the actual obituary. I was able to locate it in the Wyoming County Times and also found a brief mention of her death in the Buffalo Courier as well.

We also know from her burial records that she was the wife of Charles Backus. By the way, I found another source for the burial records online here which provided the exact place of her husband's birth, another important clue for future research. Plus doing a google search on Rev. Vradenburg yielded the tidbit that he was a pastor of the German Baptist church. This provides strength to Rollie's assertion that his family was of German origin as listed in the 1920 census data.

Charles is accounted for in the cemetery records as is his wife and his daughter-in-law Permelia. But in compiling the data, I see I have no burial information for Charles H. What happened to him?

At this point, I have only been able to locate two more references to Charles H. Both are from the digital scans of newspapers at fultonhistory.com. First, Charles H. Backus of Warsaw was one of two in the town who had been recently registered at the clerks office as veterinarians. This was according to the Thursday, October 28, 1886 edition of the Western New Yorker, a newspaper published in the village of Warsaw in Wyoming County.

But about three years later, we see that he might have used those skills in a different sort of way: 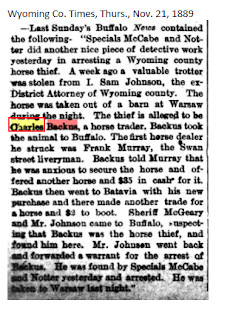 This reads in part: "...A week ago a valuable trotter was stolen from I. Sam Johnson, the ex-District Attorney of Wyoming county. The horse was taken out of a barn at Warsaw during the night. The thief is alleged to be Charles Backus, a horse trader. Backus took the animal to Buffalo. The first horse dealer he struck was Frank Murray, the Swan street liveryman. Backus told Murray that he was anxious to secure the horse and offered another horse and $35 in cash for it. Backus then went to Batavia with his new purchase and there made another trade for a horse and $2 to boot. Sheriff McGeary and Mr. Johnson came to Buffalo, suspecting that Backus was the horse thief and found him here. Mr. Johnson went back and forwarded a warrant for the arrest of Backus. He was found by Specials McCabe and Notter yesterday and arrested. He was taken to Warsaw last night."
Posted by Dawn at 6:58 AM No comments: